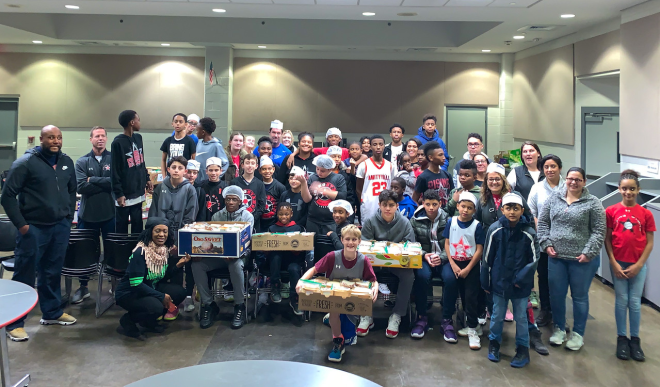 Paul Savramis is no stranger to charitable giving. In fact, the Rising Stars Youth Foundation founder insists that all participants in the RS program give back to their communities. But there are a few charity events that stand out for 2019, and RSYF’s participation in One Sandwich At A Time is one of these.

Q: What is One Sandwich At A Time?

Paul Savramis: This is a local charity that provides food for homeless and undernourished people. Through the program, organizations in New York City band together to make sandwiches for homeless people. It was founded by humanitarian and photographer Erin Dinan after she noticed the extreme levels of poverty around NYC.

END_OF_DOCUMENT_TOKEN_TO_BE_REPLACED 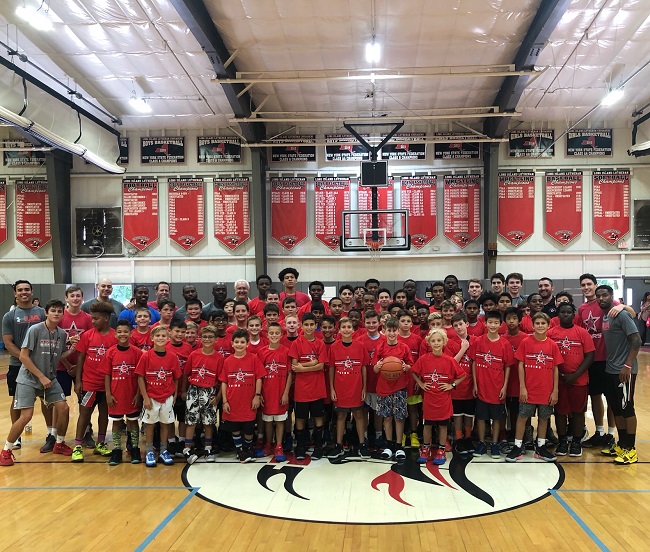 Rising Stars Youth Foundation kept its boys and girls on their toes from the time school ended until the bell rang once again this August. From summer camps to league championships with a few community service events in between, there was never a dull moment for the nonprofit. Paul Savramis reflects on summer 2019 in the following brief interview.

Q: What are some notable events that took place this summer?

Paul Savramis: We had many exciting opportunities for our boys and girls. The first thing that comes to mind is our lineup of summer camps. This year marked the 25th annual end-of-August basketball camp. This camp is sentimental because it marks a quarter-century of success for Rising Stars Youth Foundation. Although this camp is a staple, we also extended our outreach to Long Beach, where we held our first-ever basketball program.

END_OF_DOCUMENT_TOKEN_TO_BE_REPLACED

In the years since founding the Rising Stars Youth Foundation, Paul Savramis has seen countless talented players come and go. The ones he remembers best are not the best on the court, it’s the ones that were special off it. These are special individuals, many of which Savramis trained and coached personally. Many of Rising Stars’ coaches and executive staff were individuals that began as team members as early as grade 3 and now are back to support Rising Stars. Some have children of their own on teams.

But all share a common bond and remember Rising Stars as being among the best times of their lives. Sometimes, basketball remains a part of their life, as is the case with Evan Conti.

Q: Who is Evan Conti?

Paul Savramis: Evan Conti is a perfect example of everything we strive to do at Rising Stars. He has been a part of the Rising Stars family since he was in third grade. He was a recipient of the Dan Gimpel Sr. Memorial scholarship and played for Dan Gimpel (Jr.) during his time as an athlete with Rising Stars.

Q: What makes Conti stand out?

Paul Savramis: Most recently, Evan made news when he was appointed as the head coach for the NYIT men’s basketball team. He is actually the youngest head basketball coach in the US. Evan came on as an assistant coach with NYIT for the 2018/19 season. When Kevin Hamilton left the team, Evan was assigned the role of assistant coach. At the end of the season, Dan Velez, the school’s athletic director, with the support of the entire team made the decision to keep Conti on permanently.

Q: What are some highlights of Conti’s basketball career?

Paul Savramis: Evan played ball for Holy Cross High School in Queens. During his time there, he scored 1120 points and is ranked fifth all-time in scoring.

END_OF_DOCUMENT_TOKEN_TO_BE_REPLACED 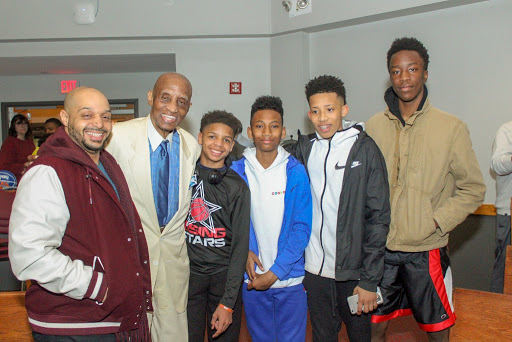 The student athletes of the Rising Stars Youth Foundation program are in a unique position to experience many events and activities that will enrich their lives, says Paul Savramis. From visiting Kobe Bryant’s Wizenard Series Training Camp, cooking for Ronald McDonald House, meal packing events for Haiti and other community service opportunities, the children are exposed to many people and unique situations that have a positive influence on their lives. One of the most recent notable experiences the student athletes have gotten for 2019 was on April 2, when they were honored to meet and listen to the legendary Basketball Hall of Fame inductee Dr. Dick Barnett. The experience was made possible through the generosity of Signature Bank, a foundation sponsor and advocate of youth development through educational sports programs.

Q: Who is Dr. Dick Barnett?

Paul Savramis: Dr. Dick Barnett is a hall of fame athlete, educator, author, poet, and motivational speaker. He played for 15 seasons in the NBA and was named all-American three times during college at Tennessee State University. Dr. Barnett, who is nicknamed “Dick the Skull,” holds a PhD from Fordham University and is a member of the Tennessee Sports Hall of Fame. Although he retired from teaching at St. John’s University in New York in 2007, Dr. Barnett has remained active off the court and is often invited to speak to up-and-coming student athletes about the importance of being a well-rounded individual and the very real value of education.

END_OF_DOCUMENT_TOKEN_TO_BE_REPLACED

Paul Savramis: These grassroots initiative programs, as we call them, have been in place throughout the city for the past six years and actually placed on Long Island last year. These are programs offered as outreach teams through local YMCAs and community centers to at-risk and underserved children. This includes all team activities free of charge, tutoring, and family memberships to the YMCA. Many of the students are given access to these new programs at a young age. They come from low-income families where addictions and gang-related issues are common.

Q: Why is it so important to introduce children to team sports and the importance of education at an early age?

Paul Savramis: I think that children, more than anything, want and need to feel like they belong. They long to be part of a team and to contribute to their community in a positive way. They do not want to feel like they are alone. Using basketball as our vehicle, we are able to let children see, from an early age, how all that is possible and how they can solve personal problems, as a team by applying the same basic concepts found on the basketball court to issues at home or at school.

END_OF_DOCUMENT_TOKEN_TO_BE_REPLACED 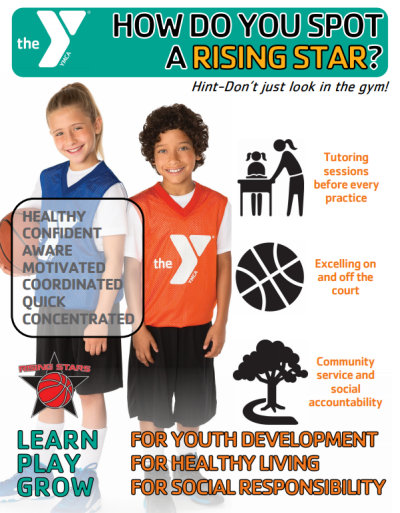 Rising Stars Youth Foundation is a non-profit organization that promotes education through sports. The foundation encourages underserved youth to excel within specialized programs that cater to youth most at risk of failure in school. The foundation does so by providing academic support through numerous channels, including private educational scholarship programs and making athletic participation for various outreach programs possible.

Paul Savramis, the non-profit’s founder, says his dream to give children an equal opportunity for success has now become reality and a vision shared by many.

Rising Stars, Inc., as the organization was first known, has gone through many changes and evolved in many ways since its humble beginnings as an after-school program at Bayside High School in 1996.

END_OF_DOCUMENT_TOKEN_TO_BE_REPLACED

For the past 16 years, Rising Stars Youth Foundation has hosted a dinner to raise funds for its programs and support the student athletes within. Paul Savramis, RSYF founder, explains that the dinner is also an opportunity to honor the men and women who have made the organization’s community involvement possible. For 2018, RSYF’s Man of the Year is Mr. Joe Feshbach.

Paul Savramis describes Feshbach as a man who deeply cares about the future of his community. He is an investment expert with more than 40 years of experience and has worked with some of the biggest names in finance throughout his illustrious career. But where Mr. Feshbach really shines is in his commitment to making changes today that will lead to a better tomorrow.

Joe Feshbach is the co-chair of the Forum on Law and Culture Society. Through this organization, Paul Savramis explains that Feshbach works with other NY leaders to address topics facing the people of the state – and the world – each year. In addition to all his good works Feshbach is a long-time supporter of RSYF, Mr. Feshbach joined an impressive fraternity of past men of the year. They include MidOcean Partner CEO Ten Virtue, Mr. Thomas J. Quinlan, III, Chairman, President and CEO of LSC Communications, Mark Clouse, CEO Pinnacle Foods, Seth Waugh, Former CEO of Deutsche Bank, and Goldman Sachs director of Alumni Mike Troy. All of these men have been honored for their belief and support of Rising Stars programs, but Mr. Feshbach was the first to have gone through the foundation with his son, Josh, from grades three through graduation of college (Brown University). With his support and the support of other leaders within the community, Rising Star’s athletes will continue to dominate both the courts and the academic world.

Paul Savramis notes that in addition to recognizing a man of the year, the RSYF Gala raises awareness about the organization’s mission, which, at its core, is to improve the lives of boys and girls. RSYF is a combination athletic and academic program for kids wishing to play basketball and to make a difference within their own neighborhoods. Through sports, RSYF teaches kids how to overcome problems they face each day.

Student athletes come from all areas of life: some from areas where drugs and gangs dominate, others from where they face equally challenging obstacles. Through a focus on education, community, and athletics, Paul Savramis and his team give kids the best start they can have in life and the equal opportunity they deserve to cross the finish line into adulthood.